Great moments in Canadian track and field
Posted 8/3/2020 6:35 PM
Bruny Surin knew before the rest of us did.As soon as the Canadian sprinter transferred the baton and the heart of a nation safely into the left hand of teammate Donovan Bailey, Surin raised his arms in victory. Roughly nine seconds later, his celebration was confirmed. The Canadian men's 4x100 r...
Published at Glenn Kubish
Mr. Nowak
Posted 7/8/2020 8:48 AM

Mr. Nowak offered me a deal.Nowak was my Physics 10 teacher, and he had done the math. I was going to fail Physics 10 unless some force stronger than the gravitational pull on my 45 per cent mark intervened.Up by the lockers in the hallway on the second floor of O'Leary High School, he laid it al...
Published at Glenn Kubish
Snowbirds
Posted 5/18/2020 11:35 AM

A group of us, I think Blatt was there and McIntosh, too, were on the 11th floor of the Tory Building where Professor Carmichael was talking excitedly about the Challenger crash, his eyes magnified by his glasses as he made an ancient point. Carmichael translated the explosion's skywriting from t...
Published at Glenn Kubish
Late afternoon thoughts listening to Vampire Weekend during a pandemic, sampling Adam Gopnik, etc.
Posted 5/3/2020 7:12 PM

I remember sitting on the examining table in the doctor's office and feeling the concept of immunity sinking in a bit. The doc had taken a pen and drawn a single line on the table's thin tissue topping. I had asked about shingles. Could I ever get it again? What could I do to prevent ever ge...
Published at Glenn Kubish
Late afternoon thoughts on Aaron Brown, IFBs, control rooms and the pandemic
Posted 4/25/2020 5:03 PM

Aaron Brown wasn't sure who was in his ear."We have, um, one of our producers on the phone, and I didn't get the name, so, why don't we just go ahead," said Brown as he anchored live coverage of the World Trade Center attacks."Are you there?"Brown's ear had in it what in the television news game ...
Published at Glenn Kubish
Late afternoon thoughts about the pandemic, Mario Lemieux, John Milton—and pylons
Posted 4/23/2020 5:56 PM

I am thinking more about pylons these days.I knew the word first as slang, a demeaning term applied to someone without natural athletic ability on skates. Used this way on the typical hockey bench: "Did you see him blow past the defenceman? What a $%&# pylon that guy is! Hahhahaha, moron. Thr...
Published at Glenn Kubish
Tim Spelliscy: a record of the past
Posted 4/5/2020 8:40 PM

On December 30, 1981, Wayne Gretzky scored five goals against the Philadelphia Flyers, setting a record for the fewest games (39) needed to reach the 50-goal mark in the NHL. It is a record that will stand longer than the Northlands Coliseum that played host to the historic night in Edmonton.It's...
Published at Glenn Kubish
Late night thoughts listening to Dylan's new song and wondering about it during the pandemic
Posted 3/31/2020 6:47 PM

Here are some shards left behind after listening to Murder Most Foul.It's written in couplets. Like Chaucer, Pope, Wordsworth and other epic poets who wrote to be spoken out loud and remembered.Stack up the bricks, pour the cementDon't say Dallas don't love you, Mr. President Another fave:Ai...
Published at Glenn Kubish
Late night thoughts while listening to Simon and Garfunkel and thinking about the pandemic, science, etc
Posted 3/30/2020 8:33 AM

Hello, doctor, our best friendYou've come to talk with us againTo share your mission for our safekeepingIn an Internet public health meetingYour prescription that gets planted in our brainsMust remainTo confound the COVID virusWe clean our hands, we scrub our phonesIn it together, though aloneEve...
Published at Glenn Kubish
Late night thoughts during a pandemic lying awake listening to my fave Milk Carton Kids song
Posted 3/25/2020 5:19 PM

It's 3:03 a.m. Just like that, sleep has thrown me up on the shore. My legs are planks. My eyes feel stretched over my temples. The curtains let in slivers of streetlight. With the earbuds cord in my right hand, I fish for the iPhone in the comforter depths. There it is. And now the blur. I hit t...
Published at Glenn Kubish
View More
Visit this blog Subscribe to this blog 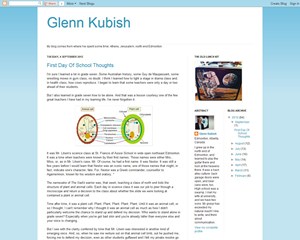