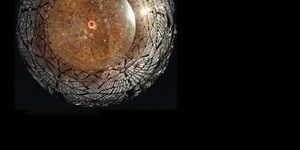 The nuclear reactions that power the sun produce enormous numbers of neutrinos that pass easily through the sun and provide a detailed measure of how the sun burns. To observe these elusive particles without interference from radioactive background, the Sudbury Neutrino Observatory (SNO) detector was developed to use 1000 tonnes of heavy water 2 km underground in an ultra-clean laboratory near Sudbury Ontario. This unique detector enabled the SNO Collaboration of scientists from Canada, the US and the UK to observe new properties of neutrinos, including the fact that they change among the three known types and therefore have a finite mass. These new properties are outside the predictions of the Standard Model for Elementary Particles and are of fundamental importance for the more complete understanding of the basic laws of physics and the evolution of our Universe. Members of the present physics faculty at the University of Alberta played substantial roles in the SNO experiment and have similar roles in further experiments at the expanded SNOLAB international underground science facility. Modification of the SNO detector to create SNO+ and study further properties of neutrinos through a rare radioactive process (neutrino-less double beta decay) and the DEAP experiment using liquid argon to search for Dark Matter particles making up 26% of our Universe will be described.

Art McDonald was awarded the Nobel Prize in Physics in 2015 for his work with the Sudbury Neutrino Observatory (SNO). SNO's unique detector enabled a Canadian-led international collaboration of scientists to observe new properties including the fact that they change among the three known types and therefore have infinite mass. Current members of the University of Alberta's Department of Physics played substantial roles in the SNO experiment and have similar roles in further experiments at the expanded SNOLAB international underground science facility.