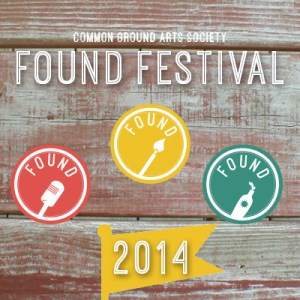 
The Found Festival is a site-specific, multidisciplinary arts festival that takes place in Edmonton's Old Strathcona neighbourhood. It's a living, breathing showcase of dance, theatre, visual art, music, creative writing and more. Since its beginning in 2012, it's been curated by the non-for-profit Common Ground Arts Society. Emerging artists submit proposals as early as November with ideas for pieces they would like to develop and present the upcoming summer in non-traditional venues. Our aim is to produce an event that is affordable, accessible, interactive, and empowering, encouraging artists to contribute to the cultural landscape of the city.

Past venues have included a funeral home, residential garage, and a 1997 Dodge Grand Caravan. We've had live music played off rooftops, movies projected onto buildings, and a play performed� in the middle of June� on a giant pile of snow. Some pieces are designed for as few as 5 people at a time, with others accommodating as many as 200. We are committed to presenting innovative, entertaining, and provocative new works which push the boundaries of audience interaction, allowing both spectators and performers to engage in a more stimulating brand of risk-taking and play.