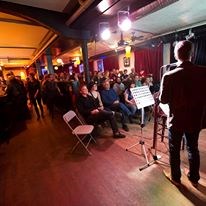 
Nerd Nite is back for our 2013-2014 season in a new [and very sexy] location. We're excited to announce that we'll be taking up residence in The Club (Rice Theatre), at the Citadel!

Nerd Nite is a break even affair and in order to move to this lovely new space (cover insurance, rentals, incidentals) we've had to make a few changes. The first is that we've had to raise the price a little. Previously, after services charges, Nerd Nite Edmonton was $12 (in advance), we've had to tack on $3 bringing the total to $15 (after fees) in order to cover costs. We hope it won't break the bank. The second, we can no long offer a free drink (for a cacophony of reasons) but don't worry, there will still be drinks for purchase. We are confident that the positives of the new space will out weight the negatives and we appreciate your understanding as we continue to explore the many corners of nerdom.

Same nerdy format:
Three speakers from your community for about 20 minutes each + beer (and other assorted beverages) = Nerd Nite

The Heroic Horn – Music, Movies and Looooove
Megan Evans
Throughout its long and sordid history the sound of the french horn has been used in some of the most poignant moments found in music. From its roots in the hunt, its brassy sound can add drama to any sweeping outdoor vista. The sound of the horn can boldly take you where no trumpet could ever dream of!!! The mellow and warm qualities are often used to nostalgically tug at your heartstrings (just think Princess Leia's theme!). Let's nerd out with a little chat about the history of the Horn, its famous (and infamous) stars as well as its uses in modern culture today.

What the Fluff are Furries?
Alexi Huskey

Things are about to get fuzzy. This presentation will explore a largely misunderstood and often misrepresented lifestyle. In costume, Alexi will review the origins of furryism, discuss how anthropomorphisms have existed for centuries, and consider what it means today to celebrate being furry. While popular television shows, like CSI, have taken cracks at the fandom by playing off its stereotypes, furry culture is much more deep, involved, and often has remarkably positive effects on local communities. While Furryism often incorporates other sub-cultures, like goths, ravers, anime, and even some hipsters, it is more than a sub-culture; it is often described by the people who live it as a lifestyle. Alexi will open your eyes to the real furry culture in Edmonton and elsewhere and will reveal what it really means for me to be furry.

Bio: Alexi has been a furry for nearly 15 years now. Always represented as a husky, and can often found dressing up in elaborate costumes for his fursuit and attending clubs and parties. When he was a pup he found he always shared an affinity for animals, and often preferred to hang out with his cat or dog as a kid and watch cartoons. Later in life he found himself particularly fond of a specific breed of dog, the Husky. However his introduction into the fandom did not come until much later when one of his friends asked him if he was a furry after noticing he was wearing a collar decoratively. Since then Alexi has remained akin to the husky and the personality traits the breed represents to him, good looking, loyal, independent and playful. For Alexi, the furry fandom represents a way to express his spirituality, maybe cope with species dysphoria, and to find like minded furs to hang out with. He can be found often “fursuiting” around at dog related charity events, and even the Edmonton Zoo. To this day, he's helped raised over $1,500 for animal rescue shelters and sled dog related rescue shelters.

What do a 14 metre radius metal hemisphere, a tesla coil, and a moon rock have in common? Aside from the shear awesomeness of their very existence, they are surprisingly excellent tools for sharing one's love of science. Trevor will discuss some of the best techniques we have at our disposal to stimulate interest in science and why it is so vital that we do so. From electrifying children to flying people to the edge of the Universe, Trevor will discuss a few of the many ways we can inspire minds young and old.

Bio: A capture the flag and urban tag aficionado by night and fun loving physicist by education, Trevor got his start working with science centres running overnight science raves for young children at the Pacific Science Center in Seattle, Washington. In addition to this pastime, Trevor used his time in Seattle to educate himself at the graduate level as a rocket scientist, with a side of entrepreneurship. He returned to Edmonton to run the Margaret Zeidler Star Theatre, largely to fulfill his dream of choreographing 10 watts of raw laser power live to an audience of up to 250 often initially sober minds. After commercializing some hard-core University of Alberta science with TEC Edmonton, Trevor worked as Staff Scientist at TELUS World of Science Edmonton for nearly 2.71 years. He recently rejoined TEC Edmonton to try to better understand the minds and research of the extreme nerds at the U of A and to dare I say, change the world.