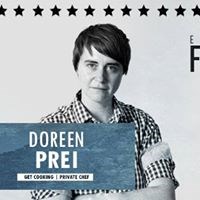 Buy your tickets Thursday at 5:00 pm at: https://edmontonfoodfight8.eventbrite.ca/

Doreen Prei:
Doreen is a Michelin-star trained German chef who her friends jokingly call ‘the communist' for her background and simple, low ingredient cooking style. Doreen has cooked in private restaurants and hotels in Germany (First Floor Restaurant), Ireland (Four Seasons, Chapter One and Gordon Ramsay), and Canada (Hotel MacDonald, Zinc and the Edmonton Petroleum Club). She won silver at her first Gold Medal Plates Championship and won gold at the Canadian Food Championships in the Seafood category.

On February 1st she's hoping to add another jewel to her crown but she's going to have to go through Steven to claim it.

Steven Brochu:
Steven Brochu was born and raised in Edmonton. He started honing his culinary chops at NAIT but quickly found homes in Vancouver at the Fairmont Waterfront, Shangri La Hotel, and Joe Fortes before returning home as head chef of the River House in St. Alberta (now known as 12 Acres). Steve was named “Best Chef in Edmonton” in VUE Weekly's 201 Golden Fork and will soon be the head chef of Edmonton area's newest restaurant Chartier in Beaumont.

When Steven heard Doreen was looking for a food fight he was more than happy to pick up his knives and take her up on the offer.

Inspired by the Esquire's network Knife Fight, Edmonton's Food Fight is a culinary battle presented by Get Cooking (www.getcookingedmonton.com/) and co-created by Kathryn Joel (Get Cooking) and Mike Hudema (Greenpeace Canada).

Seating is limited so be sure to get your ticket fast as the event will likely sell out.

Appetizers are included with your ticket price and drinks are available for purchase.

Buy your tickets Thursday at 5:00 pm at: https://edmontonfoodfight8.eventbrite.ca/