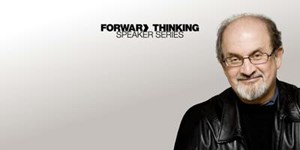 
"What is freedom of expression? Without freedom to offend, it ceases to exist." - Sir Salman Rushdie

To celebrate Freedom to Read Week, EPL will welcome Sir Salman Rushdie as part of the Forward Thinking Speaker Series on Tuesday, October 11. Sir Salman Rushdie is one of the most celebrated authors of our time. A brilliant provocateur, he's penned a handful of classic novels, influenced a generation of writers and received a Queen's Knighthood for his service to literature.WHEN: Tuesday, October 11 WHERE: Chateau Lacombe Hotel TICKETS: $10 for general admission and $150 for VIP ticket which includes a premium seat and a private reception with Sir Salman Rushdie following his presentation. Tickets are non-refundable.Ticket holders will be asked to present their EPL Library Card for admission. You can sign up for a free library card at www.epl.ca/signup.EPL's Forward Thinking Speaking Series events are general admission. Arrive early for best seat selection. Doors open at 6PM.EPL reserves the right to refuse admission to latecomers. Ticket holders have until 7:10PM to check-in. Unclaimed tickets will be sold to stand-by list customers after 7:10PM.