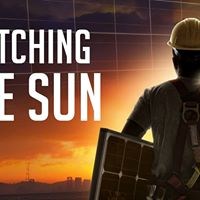 Catching the Sun! The race to lead our clean energy future

An unemployed American worker, a Tea Party activist, and a Chinese solar entrepreneur race to lead a renewable energy future. Through the stories of workers and entrepreneurs in the U.S. and China, Catching the Sun (presented by Greenpeace and Metro Cinema) captures the global race to lead the clean energy future and addresses one of the biggest questions of our time. With Alberta considering its own renewable moves the timing of this documentary couldn't be better. This film is a must see!

Get your tickets now at: https://ticketing.us.veezi.com/purchase/2166?siteToken=HzFS%2BczpE0OTsE6gU%2BGhcA%3D%3D

Several solar companies will be set-up in the lobby before and after the film to help answer all your solar questions and to showcase the great renewable energy potential Alberta has to offer.

Catching the Sun Film Synopsis:
Through the stories of workers and entrepreneurs in the U.S. and China, Catching the Sun captures the global race to lead the clean energy future. Over the course of a solar jobs training program, Catching the Sun follows the hope and heartbreak of unemployed American workers seeking jobs in the solar industry. With countries like China investing in innovative technologies and capitalizing on this trillion-dollar opportunity, Catching the Sun tells the story of the global energy transition from the perspective of workers and entrepreneurs building solutions to income inequality and climate change with their own hands. Their successes and failures speak to one of the biggest questions of our time: will the U.S. actually be able to build a clean energy economy?

Catching the Sun offers solutions that can address the climate crisis and income inequality. The film offers a glimpse into the future of energy—and suggests how people can take power into their own hands.

Check out the Trailer here: http://www.catchingthesun.tv/

Get your tickets now at: https://ticketing.us.veezi.com/purchase/2166?siteToken=HzFS%2BczpE0OTsE6gU%2BGhcA%3D%3D