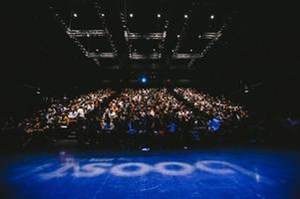 Watch Alberta's entrepreneurs pitch on the BoostR Stage. Your ticket gets you food, a drink and $20 to boost a business you hear from that night!

BoostR Stage is Alberta BoostR's live pitch event. Imagine entrepreneurs pitching on a stage to a room full of over 300 Edmontonians. The fun part is that YOU are one of those people in the crowd and YOU get to decide who gets the funding. As an attendee, you'll receive a $20 voucher to boost a business… THAT NIGHT!

Excited? We are too. Which is why we invite you – the influencer, innovator, community builder, entrepreneur, philanthropist – to join us for the BoostR Stage event to cheer on Alberta's entrepreneurs.

Come to network and support your fellow Albertans who are working hard to launch and/or grow their business, shape our local community and make a positive impact.

The evening will include:

- 6 pitches from entrepreneurs running an Alberta BoostR crowdfunding campaign. The businesses pitching at the stage are not yet selected but, STAY TUNED!

- 4 judges who will give candid feedback to the entrepreneurs pitching. We're in the works of finalizing our judging panel. STAY TUNED!

- A crowd of over 300 people from the local community, all of whom have a $20 voucher from ATB Financial to boost a business – that night! YOU can be one of those people.

- A libation on us

- Networking with some of the biggest and brightest in Alberta

- Appetizers – don't worry, we have your stomach growls covered

Rewards based Crowdfunding: the practice of funding a project or venture by raising monetary contributions from a large number of people ("crowd") in exchange for a reward that can come in the form of a product, service or fun/unique experience.

Alberta BoostR (www.albertaboostr.ca) is a rewards-based crowdfunding platform from ATB Financial for Alberta entrepreneurs. In addition to providing an online channel to raise funds, get marketing/exposure, insights/feedback and build a crowd, Alberta BoostR provides crowdfunding coaching, promotes businesses through ATB channels and holds live pitch events. If you're an Alberta-based entrepreneur or small business owner interested in crowdfunding through the BoostR community, find us at Albertaboostr.ca

How are the entrepreneurs who pitch on the BoostR Stage selected?

Entrepreneurs who pitch on the BoostR Stage are selected based on the performance of their Alberta BoostR crowdfunding campaigns.

Upon arriving, every attendee of the BoostR Stage live pitch competition will receive a $20 promo code that they can use that night to fund a business that has an active Alberta BoostR crowdfunding campaign. Boosting a business is simple – you create a BoostR log-in (name and email address) and then you select the business you want to boost with the $20 (you can boost more than $20 if you like, in which case you would cover the funds above $20 with your credit card). There will be a team of volunteers circulating the room with iPads to help you boost but you can also do it from your phone. If the business you've boosted is successful in meeting its crowdfunding goal, the funds you boosted will be received by the entrepreneur. Most $20 boosts will also come with a reward for you that you'll receive if the campaign is successful (bonus!)

Want to stay in-the-know about the latest and greatest of Alberta's entrepreneurial scene? Join the Alberta BoostR community!