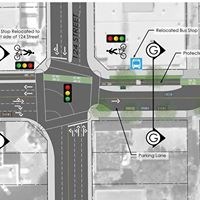 The public is invited a public meeting where the design plans for 102 Avenue bike route will be presented.

Formal presentations will take place at 5pm and 7pm followed by a question and answer period. This is an opportunity for Edmontonians to learn more about the proposed protected bike lanes and to provide feedback to the City.

The City of Edmonton has revealed the proposed design of the two bike routes planned for 83 and 102 Avenues after engaging citizens in the What the B*ke conversation since May 2014.

“During our year-long consultation process we've consistently heard from people who drive and cycle that they would prefer to see the City build protected bike lanes,” said Tyler Golly, General Supervisor of Sustainable Transportation. "People perceive protected bike lanes as the safest type of cycling infrastructure for the 83 Avenue and 102 Avenue routes that run through Strathcona and downtown.”

A protected bike lane, otherwise known as a cycle track, is a bike lane that is physically separated from motor vehicle traffic, parked cars and sidewalks. It minimizes conflicts between cyclists, pedestrians and drivers. The separation can be formed by installing barriers, bollards or by raising the bike lane higher than the road surface.

The 83 Avenue bike route runs between Mill Creek Ravine and 111 Street, leading to major destinations points such as the University of Alberta, the Old Strathcona Farmers' Market and the Strathcona Business District.

The 102 Avenue bike route runs between 96 Street and 136 Street, connecting the communities of Downtown, Oliver and Glenora.

“The planning team has worked with individuals and groups to come up with creative solutions to design challenges,” said Golly. “For instance, we worked closely with stakeholders in Strathcona to maintain important drop-off zones, motor vehicle parking and traffic calming measures.”