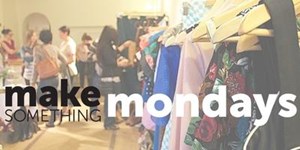 On the second Monday of each month, Make Something Edmonton hosts a gathering of Edmontonians doing a particular type of making. The idea is to help you connect with people who share your passions and inspire you to turn your ideas into reality.

Only a few years ago, being a fashion designer in Edmonton meant having a few local, loyal clients and selling at farmers' markets to make ends meet. Fast forward to the present and many of the city's designers are gaining international attention and competing in a global market. What has propelled the industry forward over the last five years? How do we keep the momentum going? We're bringing together a group of Edmonton designers, entrepreneurs and industry professionals to talk about what lies ahead.

It's going to be a fascinating discussion, but as an extra incentive to wake up early we've partnered with PARK to offer attendees $10 off when you buy a ticket to the Edmonton Artist and Designer Forum on August 16.

Amor Carandang is the owner and one of two designers behind the Edmonton-based jewelry company Hunt Amor. Hunt Amor is focused on providing simple, carefully designed products and jewelry, as well as custom creations for the bold and fearless.

As a graduate from University of Alberta's Human Ecology department, Kathleen was prepped for a career in geotextiles or surface design, not the glamorous fashion industry. Her training was practical, utilitarian and scientific. Kathleen gained an understanding of the Edmonton fashion market by designing ready-to-wear items, then turned her focus to the world of couture.

At 24 years old, Nicole Campre is the co-founder and owner of WORKHALL Boutique and designer at CAMPRE Clothing Corp. Motivated by thought, process and artistry, Nicole has built a Canadian clothing company with an emphasis on small production runs, traditional craftsmanship and international relationships.

Janis shed her small-town roots at 18, landing in Edmonton and starting a mad love affair with the city's gritty music, fashion and arts scenes. A PR grad with communications and media savvy, she's the founder of Dress Me Dearly, which was named among Alberta's top 10 style blogs by FASHION magazine and voted Edmonton's Best Fashion Blog by Vue Weekly readers in 2013.