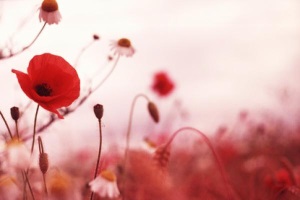 
Remembrance Day commemorates the sacrifices of people in all armed conflicts.

Many people wear artificial poppies on their clothes in the weeks before Remembrance Day. Red poppies symbolize the memory of those who died and white poppies campaigns for non-military interventions in conflict situations.

In Canada, November 11 is officially called Remembrance Day, but it is also known as Armistice Day and Poppy Day. Remembrance Day is commemorated in many countries, particularly members of the Commonwealth, including Australia and New Zealand (where it is also referred to as Armistice Day). In the United States, Veterans Day falls on the same date. In the United Kingdom, the Sunday closest to November 11 is known as Remembrance Sunday.